[Intro] Yow, murda! (Yow, murder) After this mi nuh wah hear nothing from none a unu (After this I don't want to hear anything from none of you) Yuh hear (Do you hear?) Murda, murda mi ting deh! (Murder, I'm at the murdering stage) Yuh hear dat? (*hiss teeth*) (Do you hear?) Yow dawg yuh nah nuh body fi fling weh (Yow dawg, do you have anymore bodies to throw away) (fling weh) (throw away) Yow Frass! (Oosh!) Alright then

[Verse 1] Murder gwaan, Ruger get di blame (A murder has happen, Ruger get the blame) Did fi go fi one but everybody get di grain (Was supposed to go for one but everyone got the grain) A wi guh duppy dem a nuh like wi shame (We're going to turn them into ghosts, it's not like we're shame) Guh infront di judge tell har a badness it name! (Went in front the judge and told her "it's called badness") Wah fi change if a man get detain? (Want to change if a man gets detain) People still a missing, hog a nyam dem remain (People are still missing, hogs are eating the remains) Gun a nuh singting weh Detta brandish fi fame (Guns aren't something that Detta brandishes for fame) Push eh nozzle up under him chin and slam out him… (Push the nozzle up under his chin and slam out his…) Oosh!

[Verse 2] Mawga man wid a glock inna waist (Skinny man with a glock on the waist) Big rifle mek up fi mi skinny body and mi lack inna weight (Big rifle makes up for my skinny body because I lack in weight) Shub up one inna di glock incase (Shove up one in the glock incase) A man run on, mi turn on, hollow point a rock him face (A man runs up, I turn on, hollow point is rocking his face) 223 a tackle yuh straight (223 is tackling you straight) When dat lick yuh, yuh levitate (When that hits you, you'll levitate) Pick yuh up and fling yuh back in the days (Pick you up and throw you back in the days) Car leff on jus a trackle a wait (Car's on, it's throttling and waiting) Catch up pon him, mummy never hear when him a rackle the gate (Catch up on him, mummy didn't hear him when he was shaking the gate) Calm down boy, a wah do yuh? (Calm down boy, what are you doing?) Shot a deal wid yuh chest rougher than how di grabba do yuh (Shots dealing with your chest rougher than how the tobacco do you) Smith & Wesson a buss as a duo (Smith & Wesson are firing like a duo) Clap it inna di left, mi clap inna d right and a stagger yuh guh (Clap it in the left, I'm clapping it on the right and staggering you) Bruk eh hand dem weh yuh mada gi yuh (Break the hands that your mother gave you) Could a send a man fi buss out yuh head but mi would a rather kill yuh (Could send a man to burst your head but I'll rather kill you) White sheet, body bag a fi yuh (White sheet, body bag is for you) Tuff chat pon eh internet, a d'even know a wah dat yuh do (Tough chat on the internet and didn't even know what you've just done)

[Verse 3] Nuh fingerprint when di clip dem a load (No fingerprints when the clips are loading) Nuh face, nuh trace,nuh case, mi still deh a road (No face, no trace, no case, I'm still out here ) Start wid di Taurus den after mi get the Colt (Start with the Taurus then after I'll get the Colt) Suh from mi young mi never 'fraid a soul (From I was young I wasn't afraid of a soul) Caps lock mi name, mi bold! (My name is Caps lock, I'm bold) Gi mi gyal di Mac 11 fi hold (Gave my girl the Mac 11 to hold) Babylon a circle di place and a patrol (The police is circling and patrolling) If mi get catch wid this, 5 years inna di hole (If I get caught with this, 5 years in the hole ) Magazine full a story weh never been told (Magazine's filled, a story that's never been told) (hey!) Left dem a tremble and di time nuh cold (Left them trembling but the weather is not cold) War head jump out, spent shell a slide a road (War head jumps out, spent shell is sliding on the road) Now-a-days yuh live fi see 25 thats old (Now-a-days if you live to see 25, that's old) And if mi get a penalty mi a guh strike a goal (And if I get a penalty, I'm striking a goal) (Oosh!) Dem disrespect, dem nuh deserve fi live (They disrespect, they don't deserve to live) Weh mi come from, none a we nuh know di word "forgive" (Where I come from, none of us know the word "forgive") Bury dem inna cement, chop and mince di rib (Bury them in cement, chop and , mince the rib) Mek dem nyam gunshot till it get insipid (Make them eat gunshots until it gets insipid) (Oosh!)

[Verse 4] Man dead, another man jus dis (A man is dead, another man has just dissed) Wid him gun inna him waist,what a man worthless (With his gun in his waist, what a worthless man) Weh dem have gun fah? dem fi have cutlass (Why do they have a gun? They should have a cutlass) Mi guh slug eh witness, not a damn justice! (I slugged the witness, not a damn justice!) Yow dawg yuh nah nobody fi fling weh (Yow dog, do you have anyone to throw away ) Dem feel a tralalaa ting, a murder mi ting deh! (They felt the tralalaa thing, my current level is at murder!) Murder, murder mi ting deh! (Murder, my current level is at murder!) Watch yah! (Watch here!) Di man a bawl like a big p**sy gyal (The man is crying like a big p**sy girl) Guh wash yuh face, stop move live a big sissy gyal (Go and wash your face, stop behaving like a big sissy girl) Dawg, a nuh me dem fool yah wah gi chat (Dog, are these fools trying to step to me) You'd a hear seh mi wicked if mi give gunshot (You'd hear that I'm wicked if I gave gunshots) Think bout dat (Think about that) A nuh nothing fi mi fling dung dat (It's not hard for me to throw down that) And mi belt cross mi shoulder could a be one sash (And my belt across my shoulder, could be a sash ) Lee Milla dem nuh bad, jus a sing bout strap (Lee Milla, they aren't bad, just singing about straps) Mek dem know Dj Frass (Let them know Dj Frass) Alright den (Alright then)

Alkaline's lyrics are copyright by their rightful owner(s) and Reggae Translate in no way takes copyright or claims the lyrics belong to us. "Badness It Name" lyrics is provided for educational purposes and personal use only. 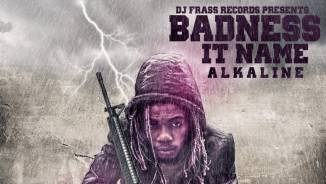