[Verse 1] Alright then Streets dun know man legit inna war (The streets already know I'm legit in the war) Neva fidget inna war, not once (not once) (Never fidget in the war, not once) Dem a boots up a likkle midget inna war (They propped up a little midget in the war) Him a bitch inna di war (He's a bitch in the war) Tracks man (stop run) Everybody know a bare box and kick yuh get (Everybody knows you got a lot of slaps and kicks) Yuh shudda neva sing dat song (You should of never song that song) Who mi a talk? (Who am I referring to?) Suck p**sy Flopcaan Wul worl know seh yuh nuh badman (dat a tru) (The whole world know that you're not a gangster, that's true) Anyweh mi si yuh, p**sy mi a buss yuh face (Anywhere I see you, p**sy I'm bussing in your face) Show yuh seh yuh cyaah style one don (one don) (Show you that you can't play with a don) Man will shoot up di car weh yuh man buy gi yuh (I will shoot up the car that your man bought you) Mek yuh affi lef dat abandon (So that you'll have to leave it abandon) Yuh get 30 million dolla wut a ride and a range as a prize (You got 30 million dollars' worth of rides and a Range as a prize) And a pack a tampon (tampon) (And a pack of tampon) Hav all tattoo pon hand (Wah gwaan) (Even have tattoo on your hand, what's going on?)

[Verse 2] Microwave yuh a bait, man a mek yuh know str8 (Microwave, you're a bait, I'm making you know this for real) Yuh suck out di p**sy, shi put har batty inna yuh face (You sucked out the p**sy, she put her butt in your face) 357 buss, it splash him all ova di place (357 buss, it splashed him all over the place) Head ova deh suh (Head over there) Foot chop off a grung a wiggle and a shake (Foot chopped off on the ground wiggling and shaking) Seh dem hav M1, mi deh yah suh a wait (Say they have a M1, I'm here waiting) Nuh even affi guh hard, mi kill yuh with a 38 (Don't have to go hard, I'll kill you with a 38) Nah use di rifle, mi nuh hav shot fi waste (Not using the rifle, I don't have bullets to waste) Madda prayaz cyaah save yuh (Mother prayers can't save you) Nuh matta how shi pray (No matter how she prayed) Seh dem a corell, mi spot him from a mile a step (Say they're a corell, I spotted him from a mile coming) Bwoy dead fram mi leggo di fighter jet (Boy is dead after I let my fighter jet go) Notwise a try run, him life a tek (Notwise is trying to run, his life must be took) Squid a vomit out har tripe, she sight har death (Squid's vomiting out her tripe, she has sight her death) Stop follow up me style, yuh cyaah bi me (Stop following my style, you can't be me) Bad fi yuh sista likkle bwoy, yuh nuh bad fi me (Bad for your sister, little boy, you're not bad for me) Mi lock di city by mi self (I locked the city by myself) A man cut yuh key (A man cut your key) Bai killaz man par wid, yuh par wid police (I hang with a lot of killers, you hang with the police)

[Chorus] Nuh weh fi tun guh, nuh weh fi run guh (No where to turn to, no where to run to) Throw tiyah pon yuh (Throw a tire on you) Gas, light yuh and bun yuh (Gas, light you and burn you) Try sneak diss mi, brawling gun dun yuh (Tried to sneak diss me, brawling gun finished you) Buss the 40 till it breeze, (Fire the 40 until it breezes) Di place tun upside dung (The place turned upside down) War cyah ova until dem ova (War can't be over until they're over) Cyaah manage likka, batty bwoy, guh sober (Can't manage liquor, f*ggot, stay sober) Nuh mek dem fool yuh (Don't let them fool you) Vendetta will skool yuh (Vendetta will school you) Memba weh reach yuh weh day a yuh studio (Remember what happened to you the other day at the studio)


Alkaline's lyrics are copyright by their rightful owner(s) and Reggae Translate in no way takes copyright or claims the lyrics belong to us. "Microwave" lyrics is provided for educational purposes and personal use only. 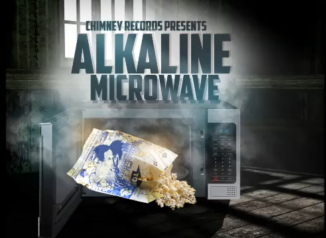